James N. Muir was born in Indianapolis, Indiana 1945. He attended the United States Military Academy at West Point for one and a half years and completed his B.S. Degree at Indiana University in 1970, while also having served six years in both the U.S. Army and Air Force. His professional art career as a sculptor began in Sedona, Arizona 1980 where he has continued to be a full-time professional artist for over three decades. He owned his own bronze casting foundry, Seraph M Fine Art Bronze, from 1982 to 1988 in Sedona, Arizona. He has completed over 100 sculptures to date, with over 60 lifesize and monumental sculptures placed in public locations across the country and abroad.

Allegorical Art is a term Muir uses to describe his art as being filled with symbolic meaning. Bridging the centuries from his historical military subjects to today’s social, political and spiritual commentary, his sculptures speak eloquently of Duty, Honor, Courage, and Justice, but above all, of Truth and the ultimate triumph of the Human Spirit. He has built upon the recognition gained initially as an historical military sculptor to create an ever-expanding array of artistic commentary exemplifying the highest qualities of man.

Muir's early interest in history and the military was reinforced by his experiences as a West Point cadet and to which he also attributes the cementing of his personal “Code of Honor.” Muir’s ever-deeper involvement with horses, and his continuing quest for spiritual Truth, led him to Arizona in 1979 for the freedom and inspiration of the great American West. He ultimately settled in Sedona, Arizona and there embarked on a full-time career in sculpting, initially specializing in historical subjects. In 1990 he began to expand his work to include contemporary subjects and accepting commissions in lifesize and monumental.

One long term goal realized, was Muir’s first book, “Lanterns Along The Path”, published in 2004 with a second printing in 2005. The book was chosen to be offered nationwide by Barnes & Noble. A labor of love, Muir spent nearly seven years writing the book that showcases many of his sculptures with a flowing narrative which addresses the spirit of the human journey. The book was recognized as its own work of art: Muir received the “2004 Pinnacle Book Achievement Award” in the Inspirational Category.

Recent commissions include a 30 foot high Crucifix and Christ sculpture for Chapel of The Holy Cross in Sedona, Arizona, a monumental Confederate piece “The Last Horseman” for Martinsburg, West Virginia, and the 25 foot high monument for Texas A&M University, symbolizing their 6 Core Values.

In keeping with his deep spiritual convictions and social consciousness, Muir’s sculptural and philanthropic works reflect the critical nature of the times in which we live. Whether historical or contemporary, “The golden thread that ties it all together is still his never-ending quest for the essence of life - for Truth in its purest form.”

"Allegorical Art" is a term James Muir uses to describe his work, which is filled with symbology to help create a heightened social, political and spiritual awareness. "The allegorical symbolism in my sculptures bridges the centuries of history to make contemporary statements about the human condition, in order to exemplify the highest qualities of man. My work speaks of Duty, Honor, Courage, Liberty and Justice, but above all, it speaks of Truth and the ultimate triumph of the human spirit".

Muir's subjects matter ranges from historical subjects, to today's contemporary issues. Whatever subject that is used, the golden thread that ties it all together is still a never-ending quest for the essence of life - for truth in its purest form.

Originally sculpted in clay, his sculptures are cast in bronze using the classical:Lost Wax" process. Mr. Muir is available for lectures and/or for workshops to teach the "Use of Symbolism" in Creating Allegorical Art.

Arizona sculptor, Allegorical Artist James N. Muir was selected as a "Nominee for the Arizona Governor's Art Award 2009". Muir states "It is truly an honor, I deeply appreciate the recognition for my body of work these last 29 years, and to be placed in the company of such noteworthy and qualified individuals".

Muir is collected nationally and internationally, with over 20 lifesize/monumental sculptures in Arizona alone. Several of those pieces are located in the Phoenix/Scottsdale area and include: Maricopa County Sheriff's Memorial "They Serve Well" in downtown Phoenix; Scottsdale Healthcare Hospitals "Caduceus" at Shea and Osborn locations; "The Newsboy" in downtown Mesa; and "Quo Vadis" at All Saints Episcopal on Central Avenue. Other Arizona locations with his lifesize and monumental are: Sedona, Prescott, Flagstaff, and Greer. James Muir's career began in Sedona, Arizona some 30 years ago and while he has established a major presence with his monuments in public areas throughout Arizona, he is as widely collected in other parts of the country. New installations in other parts of the country include: New York-West Point Jefferson Library "Thomas Jefferson 1802", Louisville, Kentucky-Sons of The American Revolution Headquarters "Sons of Liberty-1775", Chicago-"The American Pieta", and Dallas, Texas "Walk With Me" (20 ft. high), along with "Colonel Travis-The Line" for the Bush Presidential Library.

James Muir believes we are all given a path of service to humanity and considers his talents as his own way for him to contribute in a meaningful way. In addition to his sculpture, Muir wrote a book "Lanterns Along The Path" that was selected for the Pinnacle Book Achievement Award in the Inspirational Category. Another long-term goal which Muir has finally realized, is in creating the non-profit organization The Human Liberty Foundation, which among other activities, provides scholarships to art students and annually recognizes people serving the cause of freedom in their own way.

James Muir sponsored a table at the 2009 Arizona Governor's Art Award held at the Arizona Biltmore Resort April 14, 2009 that was a grand affair with over 700 people in attendance. 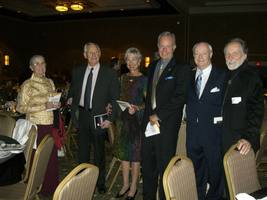 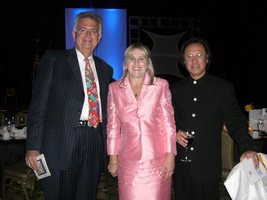 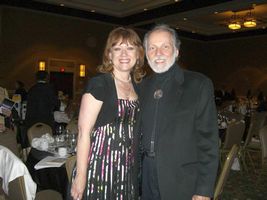