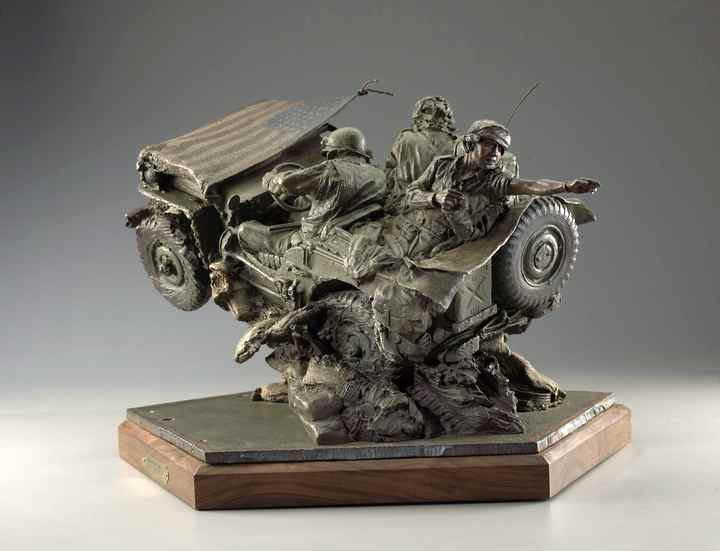 A tribute to the heroism of our "brother" Americans who fought to preserve Freedom in World War II as epitomized by the D-Day invasion against the stronghold of Fascism.

"King Henry the Fifth"
Act IV Scene III
"This story shall the good man teach his son; And the 6th of June shall ne'er go by From this day to the ending of the world, But we in it shall be remembered, - WE FEW, We HAPPY FEW, WE BAND OF BROTHERS; For he to-day that sheds his blood with me, Shall be my brother; And gentlemen , now a-bed, shall think themselves accurs'd, they were not here; And hold their manhoods cheap, whiles any speaks, That fought with us upon Normandy."

All of my work can be viewed on at least three levels: artistic, literal, and symbolic or allegorical:

Artistically, I have striven to design the elements of this piece into an exciting work that captures both the chaos of war and the courage and determination of brave men in combat. This is not a static statue but a dynamic statement

Literally, the piece presents a D-Day scenario of U.S. soldiers courageously breaking through enemy lines to carry a wounded officer to safety. The sand-bagged machine gun nest is smashed as is the Third Reich as indicated (identifiable from only one view) by the shattered swastika formed by the Axis weapons. Also, in its wake, lies a broken cart wheel representing the subsequent upending of the flag of the Rising Sun of Japan in the Pacific Theatre. With three wheels off the ground the "JEEP", carrying its precious cargo, human as well as boxes of ammunition and rations of food - careens on its course, guided by the iron hand and nerve of its 4th Infantry Division driver and guarded by an eagle-eyed 101st Airborne "Pathfinder" riding "shotgun" with a Springfield M1903-A1 sniper rifle. In back, aided by a 29th Infantry Division Medic, is a wounded Ranger Captain still giving commands to his left-behind unit in spite of his wounds. The American flag on the hood is a battlefield expedient to avoid drawing fire from Army Air Corps fighter planes.

While everyone is familiar with the combat role played by the ubiquitous "JEEP", this rendering stresses the humanitarian services performed, as well. Like the trusted horse of the cavalry, the "JEEP" was always there to faithfully serve his soldier through thick and thin, good times and bad, and, if necessary, carry him to safety from the maelstrom of battle.

First, and above all, the flag (flying as the highest point of the sculpture) identifies the "JEEP" as representing the power and might of the United States of America, serving her combat soldiers, and the world, in the never-ending fight to "proclaim Liberty throughout the land". The soldiers represent the four major races from the melting pot of America - all united in purpose in the truest brotherhood of freedom:

The driver, while steadfastly guiding the nation straight and true through the shot and shell of adversity, is also keeping a watchful eye to the "Left" from whence cometh the dangers of extremes of socialism - the movement of the masses. He is appropriately armed with a Thompson sub-machine gun. The "Pathfinder" is guarding to the "Right" from whence cometh the tyranny of fascism and dictatorship. He is appropriately armed with a sniper rifle. The Medic, looking straight to the objective is radioing ahead to indicate that true world peace will only come with the healing qualities of genuine care-giving. The Captain, a "Ranger" of the world who possesses the wisdom and foresight of a good leader, while selflessly looking out for the well-being of those currently under his command, also is ever-mindful of both a duty to the sacrifices of those who have gone before (and are now behind us in the history of this great nation) as well as to our heirs yet to follow. At the same time his gesture gives a warning to always be alert as the greatest danger always comes from behind (and within). And, coming full circle back to the "JEEP", its wheels must rest firmly upon the "Cornerstone of Freedom" and not rise too high and arrogant on a foundation of sand or the flag, now flying proudly, will become "Union Down" the international signal of distress.
This is D-Day for America and the world.

Secondly, the "JEEP" represents the military and their ideals of "Duty, Honor, Country", moving relentlessly forward in overcoming all obstacles while firmly based upon the cornerstones of Justice and Freedom. The soldiers represent the same American mix that has made this country great.

Universal Symbology: At the highest level this sculpture represents the journey each of us is on, as we courageously guide our vehicle of soul through the shot and shell of adversity. Staying the course on the straight and narrow, while guarding against extremes to the left and right, we must always balance the heart and the head - emotion and mind - being our own medics and our own Captains.

Always we must be ever-mindful of our true origin behind us and the ultimate objective ahead in pursuing our Duty to our Supreme Commander. 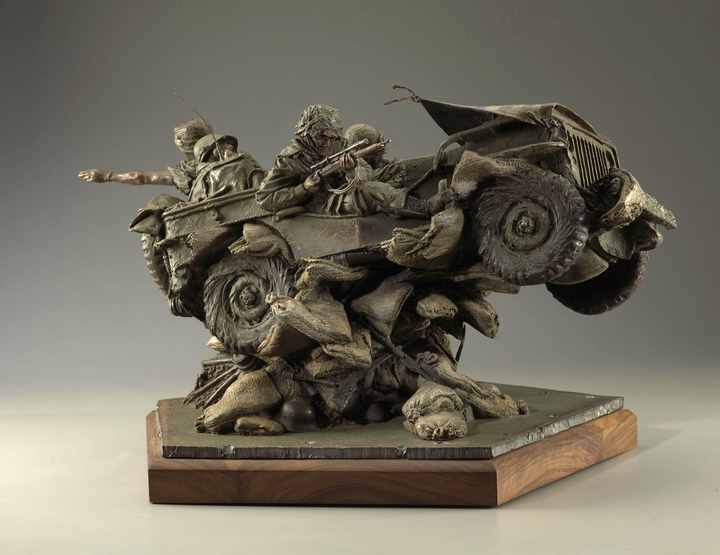 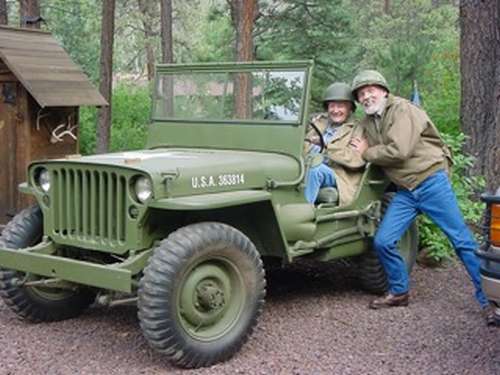 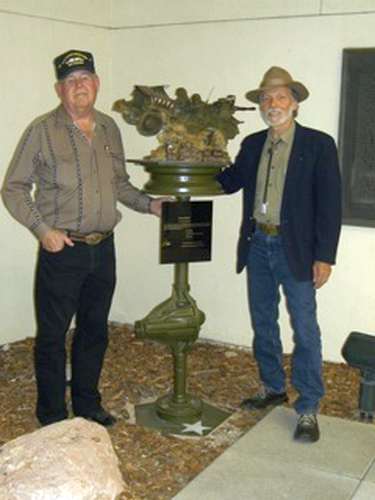