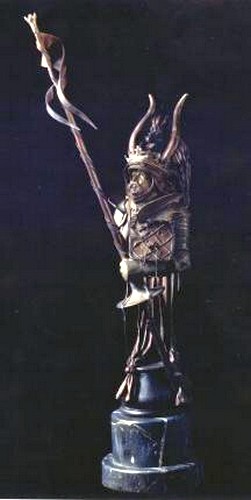 Depicting a champion of the Jousting Tournaments of around the 15th century. Armour for the "Lists" had become highly specialized with interchangeable plates and attachments. Shields were replaced by targets affixed to the left breast and ribbed to help prevent the opponent's lance point (designed to catch, not pierce) from glancing off. The lance was of stout, hollow, wood for strength and lightness, yet intended to shatter, rather than injure the opponent.

With no shield on which to display the Knight's heraldry, his identity was shown by often elaborate headdresses replete with figures, horns and tapestries fitted atop his helm. A removable face grate and plate will complete this knight's equipment.

This was produced in a limited edition of only three pieces symbolically representing Body (emotions), Mind and Soul. This is the challenger in the tournament of Life. Upon his helmet is the rampant horse to give energy to whichever of the two horns we choose--Material or Spiritual, lower self or higher Self. Life at all three levels is a constant battle to make the right choices. If we do not choose wisely, He is always there to unerringly knock us and our self-pride to the ground with a direct lance blow to the heart. The swallow-tail pennant on his lance reflects this "duality" at the point of impact (choice). Yet, note that just as in the jousting tournaments, the intent is never to cause serious injury or death but rather as an exciting game, whereby, we all can rise up again after every "defeat," and in learning our lessons, dust ourselves off to remount and have another thrilling run at the "tilts." Time after time we strive to best our benevolent opponent only to find in the end that we have "met the enemy and he is us.