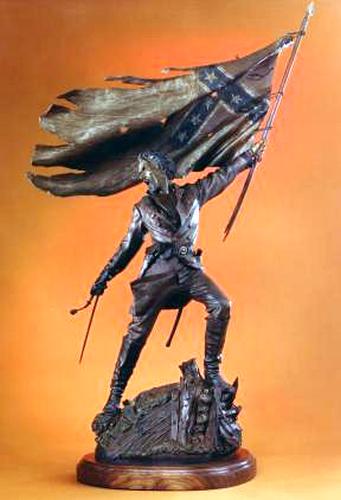 The second national flag of the Confederacy was officially adopted on 1 May 1863 to replace the 1st national or "Stars and Bars" which, due to its similarity to the U.S. flag, too often led to confusion on the battlefield. The 2nd national, with the St. Andrews cross in the canton, on a pure white field, became known as the "Stainless Banner." The St. Andrews cross, designed by William Porcher Miles, had been adopted as the battle flag of the Confederate Army of the Potomac (later to be re-designated the Army of Northern Virginia) in September of 1861.
This piece depicts a Confederate Infantry captain leading a charge over the Federal breastworks. He is armed with a Colt's pistol, with extra rounds carried in a musket cap box, and a field/staff officer's sword of unknown Southern manufacture. The belt buckle is a rare style of Central Government production.

Although the Regimental Infantry flag or "colors" would not normally be carried into battle there are documented instances of this happening. There were also several occurrences where a company, and even a staff officer picked up the flag from a fallen color bearer and bore it onward in the forefront of the battle. This is one of those times, when Southern courage would hurl itself into the maelstrom of flying shot and shell to bring forth victory against all odds.