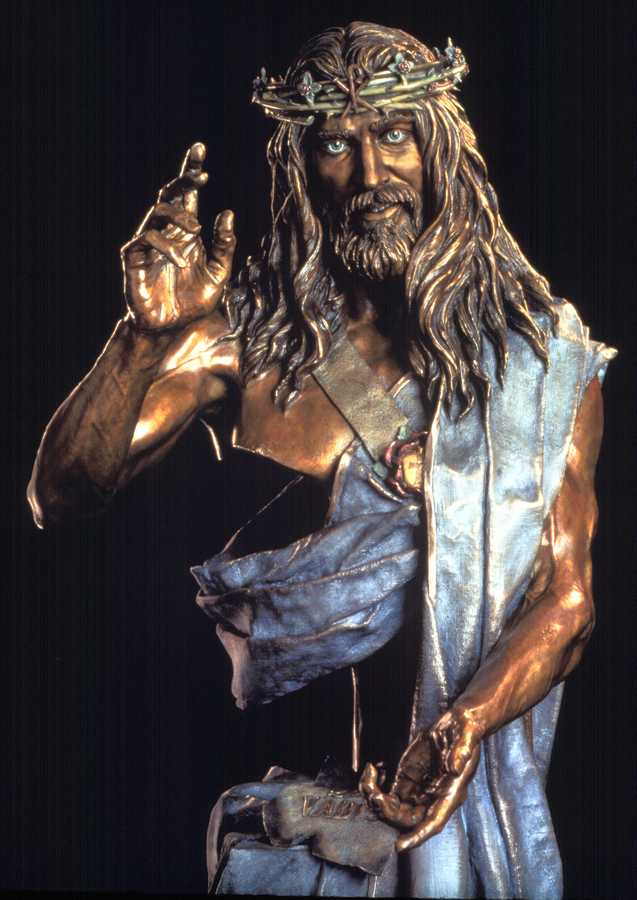 "Yes, I come to bring Peace, but first I bring the Great Sword of Truth that will bring illusion to the surface where it can be recognized and severed from that which is real."
Mathhew 10:34 vari.

"For the Word of God is living and active. Sharper than any double-edged sword, it penetrates even to dividing soul and spirit, joints and marrow; it judges the thoughts and attitudes of the heart." Hebrew 4:12

"Quo Vadis"-Where are you going?-an allegory of th resurrected Christ is a depiction in bronze of creation's return to the Creator, of humanities return to God. From base to crown, a symbolic spiritual quest for the hidden meanings within, symbols within symbols, where God's Truth is revealed. The title ‘Quo Vadis' comes from Peter's question to the resurrected Christ, ‘Quo Vadis Domine?' ‘Whither goest thou Lord.' Leaving Rome to avoid persecution, Peter met Jesus who was on His way to Rome along the Appian Way. Jesus replied that He was going to Rome because His people were being persecuted. This response humbled Peter and prompted him to return to Rome to confront the persecution and his own eventual death by crucifixion.

The base of raw un-hewn granite is the "Rock of Ages"-the solid foundation of Faith upon which all else must be built. It also symbolizes the physical nature of our being, the rough material of our souls. Thus, just as the sculptor chisels away at the unfinished stone, so must we chip away the unfinished nature of our spiritual selves, removing the non-essential and introducing from and meaning. As the sculptor and the spiritual seeker both progress, the raw material begins to take shape, to be squared away to become the "perfect ashlar," the trued foundation stone, upon which God can build His house.

The squared pedestal further represents the commonality of our collective growth through our spiritual community with others with its emphasis on tradition, teaching, and authority as foundations and guides. Its abrupt end as a funeral bier depicts the death of dogma and identification with physical, mental, and spiritual self-limiting beliefs.

The cloak Jesus is wearing also represents the limitations imposed by illusion. Through spiritual growth, we leave illusion behind as in the resurrection, Christ left his shroud behind. Beyond illusion, we enter into the great Void, the ‘Passage Perilous' opening into the true mystery of God. All that has gone before serves as important sign posts that point in the direction of God but they are not sincerely confront the question emblazoned on the scroll-‘Quo Vadis'-where are we truly going? Do we remain on the shore, clinging steadfastly to the illusions of our closed minds and hardened hearts, or do we cast ourselves on the tempestuous Sea of Enlightenment, in our ship of Faith to be borne along by the Breath of God.

In the course of our journey, just as the diagonal robe depicts a change of attitude so, too, is safe passage assured only through an attendant attitude change from self-centered to God-centered. This change can only come about through the sacred heart of the beloved ‘Son of God' and cannot be achieved without our own supreme sacrifice of the ego, the illusion of self, upon the great Sword of Truth.

Thus it is that the figure of Jesus is depicted wearing a sling with a child's wooden sword draws no blood, inflicts no violence. So it is with Truth, as we are reminded by Jesus' exhortation to be like children in the purity and simplicity of our faith.

The sword also has three nails in positions of crucifixion. The shadow of a human form, the ego, is burned into the sword, representing the resurrection that we experience each time we cut away another layer of illusion and reveal a greater degree Truth. The presence of an acorn at the center of the cross-shaped sword affirms that spiritual growth is incremental and inevitable. Like the re-leafing and annual growth of an oak, we are continually reborn with each new spring of Truth. As divine enlightenment unfolds our hearts like the petals of a rose, the pure gold of our true spiritual being is revealed.

Herein lies our own resurrection-a transformation from the opaque density and heaviness of rock to the clarity and light of the infinite possibilities of this newly revealed higher realm. Additionally, while the shroud represents the cloaking aspect of delusion, there is always the golden thread of truth, that straight and narrow path, that extends unerringly from the base rock of materiality to the highest, lightest, area of spiritual realization.

It is here that we finally come face to face with the Christ. The figure of Jesus is not only a personification of the Christ of God incarnate, He also best exemplifies the blending of duality into one perfect balance. The masculine, positive polarity is exemplified by the extended right hand in an expansive ‘yang' gesture conferring God's unconditional Love and Peace. The feminine, negative polarity is expressed in the open, receptive ‘yin' gesture of the left hand. Like a Father, raising his right hand in sublime blessing to all who come to Him with an open and contrite heart and mind; like a Mother reaching forth to receive our hand in His, our trust in Him, to lead us to our final ‘at-one-ment' with the Divine-to our own crown of victory.

The crown of thorns, symbolic of His, and our own, suffering has been transformed to become a crown of spiritual victory. The trinity of nails, an emblem of the crucifixion of heart, mind, and soul to become pure Spirit through the ‘Chi' (X) of the Christos, and ‘Rho' ( r ) staff of the Divine Shepherd, emblazon a crown circled thrice ‘round by rose vines-a Holy Trinity accented by the twelve blossoming "rose-croix" of our own faithful discipleship.

Like the very Rock of Ages baptized with the living blood of those who truly seek, the completed allegory forms the embodiment of the Christ, the Alpha and the Omega of our own spiritual journey back to God. A journey that begins, and ends, with Love. 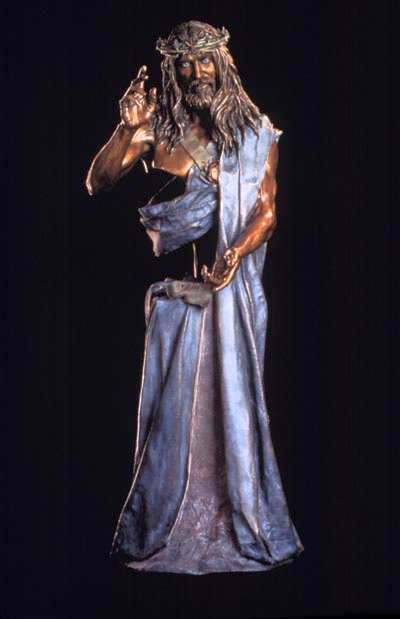