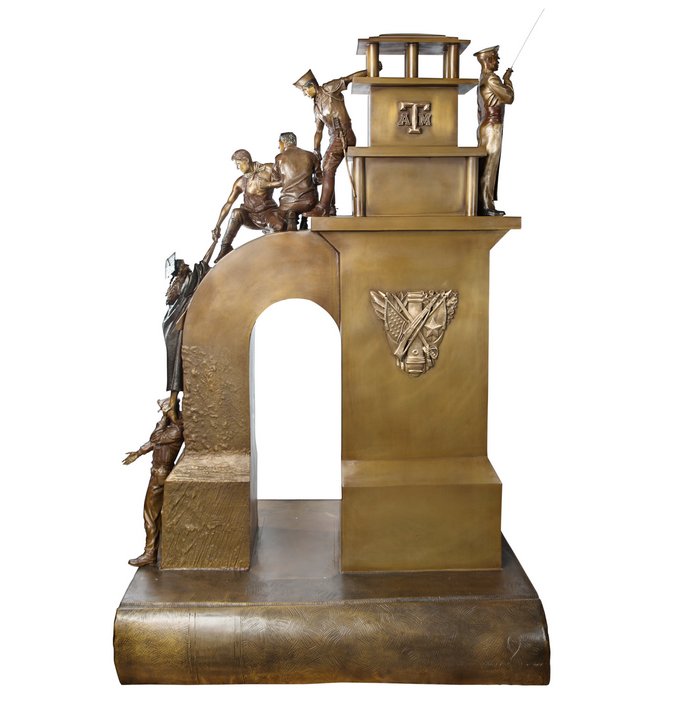 A limestone tower of character, built upon the “solid rock” foundation of granite, stands as a Cenotaph in Memorium to all the Texas A&M/AMC graduates who have shaped their lives by the guiding principles of the “Six Core Values.”

Designed to rise twenty-four feet high, for the twenty-four hours of every day, the edifice begins with the rough surface of raw character – the “rough ashlar” of the stone mason/sculptor being gradually worked and refined to become the geometrically “perfect ashlar” upon which shines the emblem of Texas A&M. This block of perfected character is, itself, directly supported by the “Tradition” block of those who have gone before and have since scattered to the four corners of the earth, as indicated by the four corner columns. In turn, the perfect ashlar of character supports the six columns of the “Core Values” standing in unity to uplift the ultimate three-tiered “capstone” of perfection of Body, Mind, and Spirit. In all there are twelve levels to the tower representing not only the twelve months of the year but also each has its own symbolically specific dimensions and shapes relating to life’s journey.

The Arch symbolizes the inner journey to perfection, as well as the outer journey of passages through different levels of experience. At the very top of the arch is "LEADERSHIP", the Commander of the Corps, setting the example of leadership by helping up his fellow “values” to accomplish their mission.

Next comes "INTEGRITY", in a firm forearm grip with Leadership, dressed in the simple working clothes of an engineer, the "M" in A&M, wearing a compass on his wrist signifying unfailing determination of direction and purpose.

"LOYALTY" is next, with a locked grasp to Integrity above. He is dressed in the mode of a farmer/rancher, in harmony with the earth as well as with Humanity, the “A” in A&M, bare-chested to show the muscular strength of his determination and loyalty. Over his shoulder is his bag of “good seeds” to sow in the fertile ground of character. His strong grip to the figure below is one that cannot slip or fail.

Next comes "EXCELLENCE", “the Great Equalizer.” This is a female student, now on the scene after so many years of A&M’s being an all-male institution. She is in the gown and cap of the aspiring graduate. In her left hand she clutches the yellow/gold Rose of Excellence, and Texas, which will be placed upon the highest level once she has risen to the very top.

“Excellence” is being supported up the rough base of the arch by "SELFLESS SERVICE", depicted as one of the A&M recipients of the Congressional Medal of Honor, extending his hand to help others. Wearing the USAAF uniform and “crush cap” of a 1943 aviator; around his neck is the Medal of Honor – the symbol of ultimate selfless service. He is reaching out, in a challenging invitation, to all who would join in the quest for perfection of character.

On each side of the Cenotaph tower is a bas-relief of the respective emblems of the A&M ring with the center seal on the front. Beneath the seal are chiseled the Six Core Values:

Followed by the word, “TRUTH”, upon which all values are based. The chisel and hammer of the heritage of the A.M.C., left by the original carvers, rest below on the granite Book of Knowledge. Above stands a member of the elite Ross Volunteers, in dress uniform with distinctive red sash, offering a sabre salute in RESPECT for the noble Values and Tradition of Texas A&M. 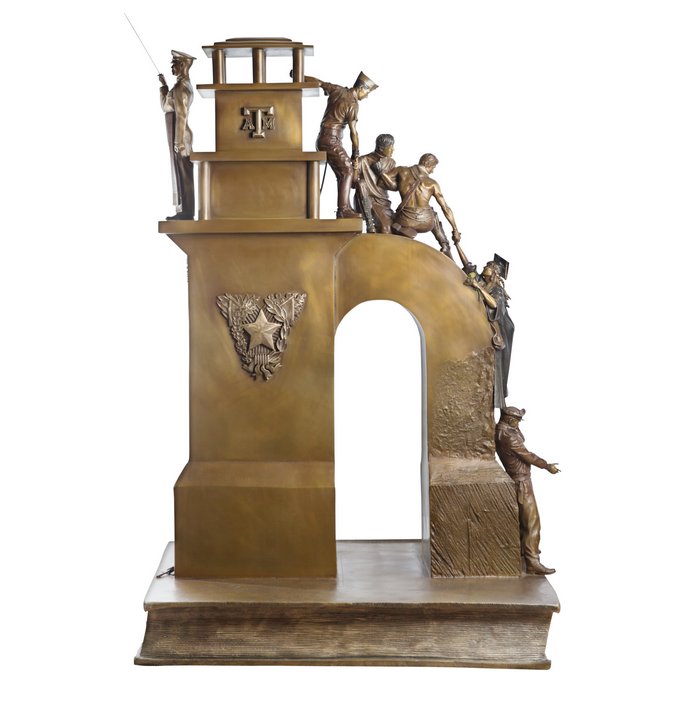 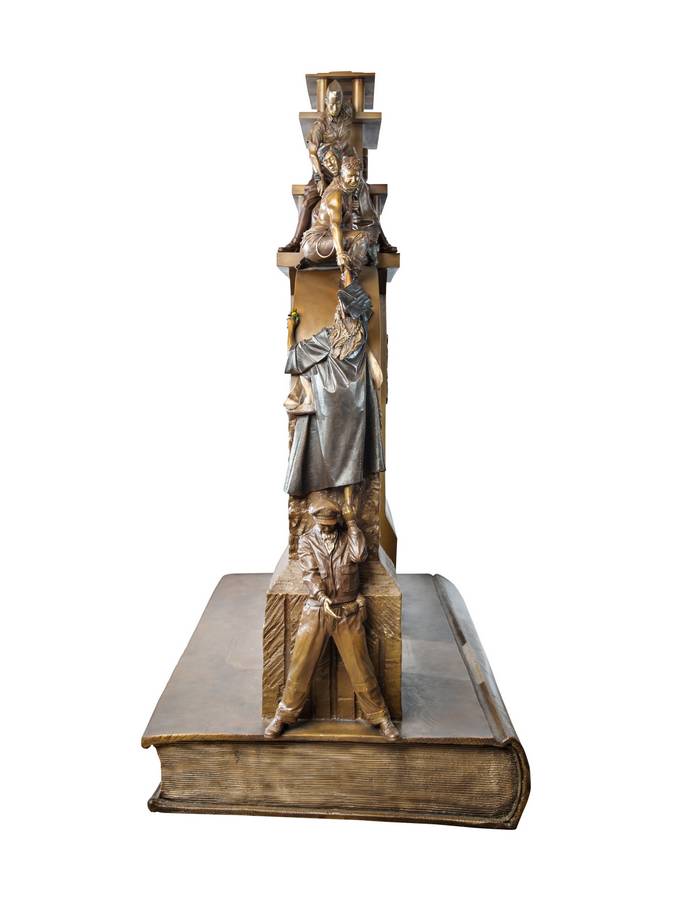 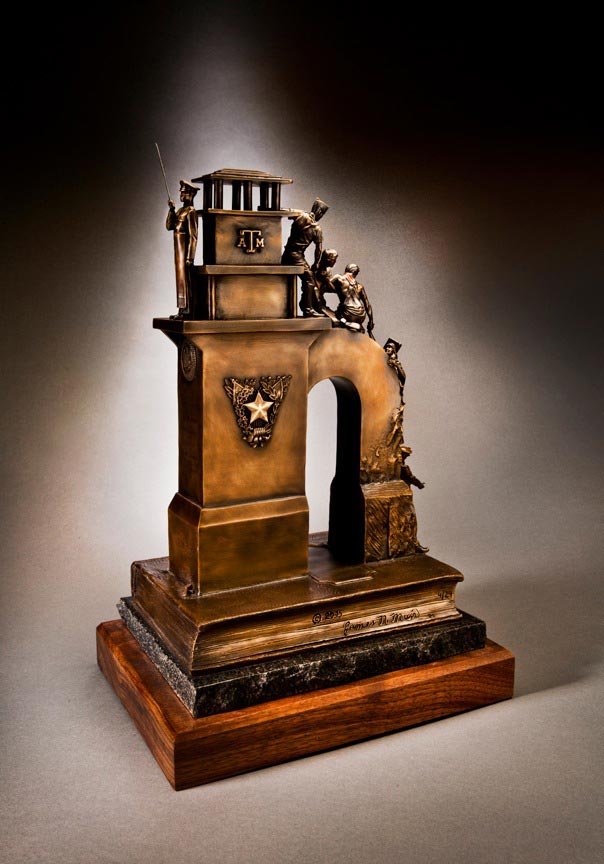 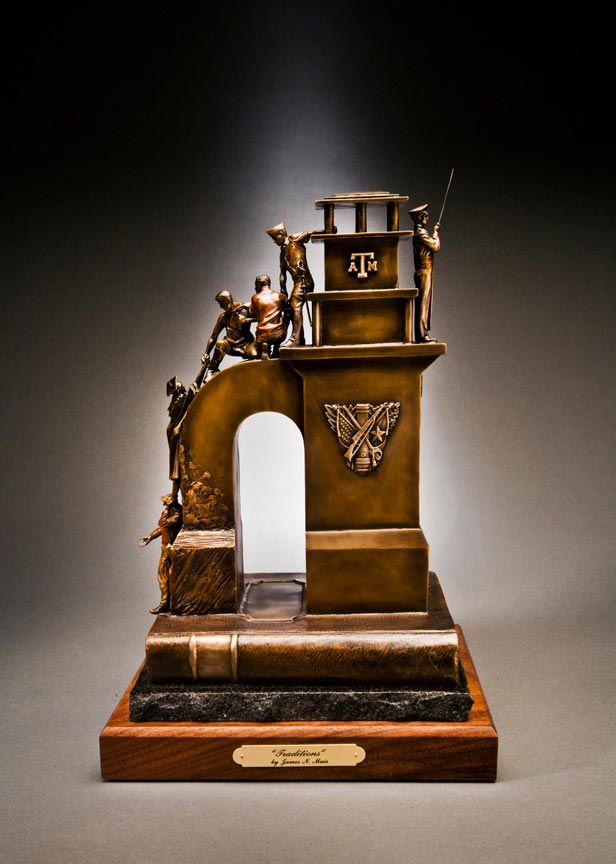 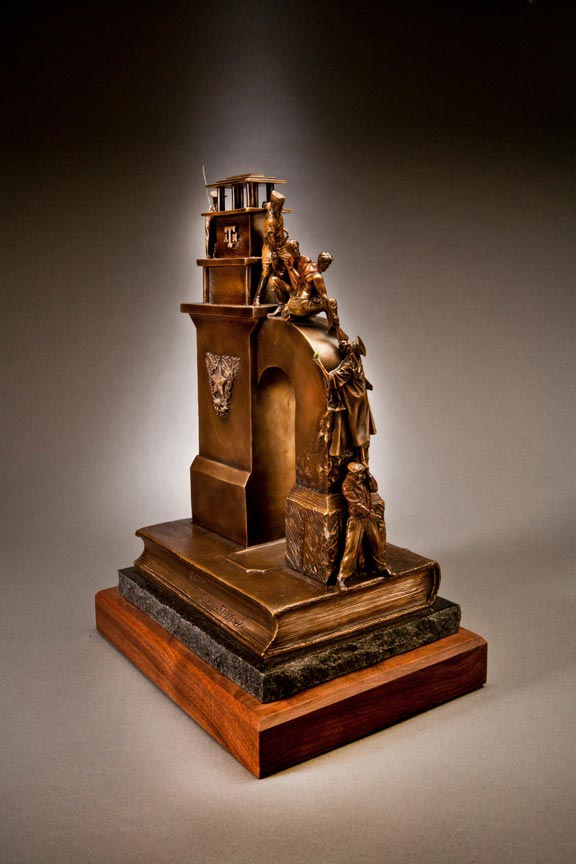 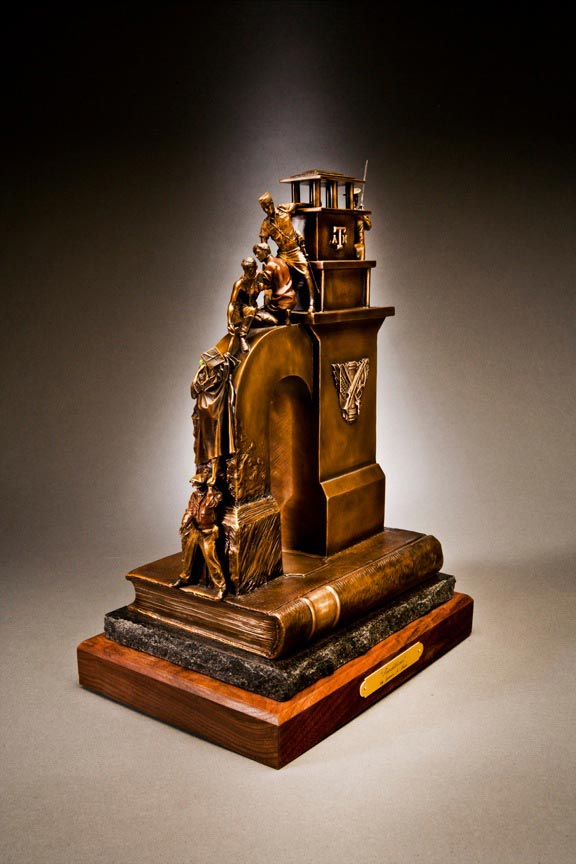